people who seem to have easy lives,
are actually people... who are easy
to live with... in the first place.
~ age 49 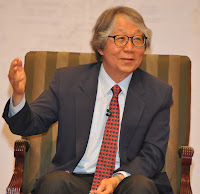 Professor Tommy Koh Thong Bee, affectionately known as Tommy was born on 12 November 1937 in Singapore.  He was educated in Raffles Institution from 1952 to 1957.  In 1961, he graduated with an LLB (First Class Honours) degree from the University of Singapore , having been in the pioneer batch of law students.  He went on to Harvard University to obtain an LLM degree in 1964, and also a Postgraduate Diploma in Criminology from Cambridge University in 1965.

Subsequently, he joined the University of Singapore and was the Dean of the Faculty of Law from 1971 to 1974.  In 1977, he was conferred a full Professorship.  In 1984, Professor Koh was awarded an Honorary Degree of Doctor of Laws Yale University.  He has also received awards from Colombia University, Stanford University, Georgetown University and the Fletcher School of Law and Diplomacy.

Tommy was appointed Ambassador to the United States of America from 1984 to 1990.  He was Chairman of the Preparatory Committee and the Main Committee of the UN Conference on Environment and Development from 1990 to 1992.  He was also appointed Director of the Institute of Policy Studies from 1990 to 1997, and Chairman of the National Arts Council from 1991 to 1996.  Tommy was a member of the UN's High-Level Advisory Board on Sustainable Development from 1993 to 1995.  He was also a member of the Earth Council from 1993 to 1996.  From 1994 to 1995, he served as the Executive Secretary of the APEC Business Leaders' Forum called the Pacific Business Forum.

He was the Second Arthur & Frank Payne Visiting Professor at the Institute for International Studies, Stanford University, USA, for 1994/1995.  He was appointed by the United Nations Secretary-General as his Special Envoy to lead a mission to the Russian Federation, Latvia, Lithuania and Estonia in August/September 1993.  He is currently a member of a World Trade Organisation (WTO) Panel considering the dispute between the United States of America and the European Community over the Helms Burton Act.

Tommy was conferred many honours, both locally and internationally.  In recognition of his vast contributions to Singapore, he was awarded the Public Service Star in 1971, the Meritorious Service Medal in 1979, and the Distinguished Service Order Award in 1990.  He was appointed Commander of the Order of the Golden Ark by HRH Prince Bernhard of the Netherlands in March 1993.  He also received the 1996 Elizabeth Haub Prize from the University of Brussels and the International Council on Environmental Law in April 1997.  Tommy received the award of the Grand Cross of the Order of Bernardo O'Higgins from the Government of Chile in April 1997.

He is currently the Ambassador-At-Large at the Ministry of Foreign Affairs and Executive Director of the Asia-Europe Foundation.  Tommy married Dr Poh Siew Aing in 1967 and they have two sons, Wei and Aun.  In spite of all his academic and international awards and appointments, Tommy is well loved by all his students, Faculty, peers and friends as well as all who have come into contact with his from all walks of life.  He is the Patron of the Nature Society, the Asia-Pacific Centre for Environmental Law, the Substation, the Singapore International Film Festival, the Singapore Association for Environmental Companies, the Singapore Librarians' Association and the Theatre of the Deaf called "Hi ! Theatre."
Despite his high office, Tommy has always been very humble, sincere and very approachable and is a friend to everyone, whether you are in high office or just a student.  Hence, his popularity within Singapore and outside.  He is indeed an outstanding Rafflesian by any measure.

In return, Tommy Koh launched a 4-hit combo. One of them appears to be an old favourite:

"In Singapore, unlike the United States, racial and religious harmony are prized above the freedom of speech and freedom of the press.

This does not mean that one side is right and the other side is wrong. What it means is that we are different because of our different histories and circumstances.

It is not fair for the Yale faculty to criticise Singapore for its 'lack of respect for civil and political rights' without acknowledging that it is only 47 years old and that, in that short time, it has transited from the Third World to the First."

Old as it may be, it's never been very clear. Yes, Singapore and US are different in the ways he mentioned. But it doesn't immediately follow that there isn't a right and wrong about it.

Tommy Koh's case rests on Singapore's youth. But I daresay the Yale faculty is aware of our country's age. What did they miss, according to Koh?

It has to be something like this: When a country is young, civil and political rights are reasonably not its priority. There are more pressing matters for a country in its infancy, such as social harmony.

What do you think of his argument?