The Way To Be Happy ~ by Steve Goodier

Someone just sent me this via email. Mainly, the story is about 3 dedicated nurses. A very good read.
~~~.
THE WAY TO BE HAPPY
Even in religious education one doesn't always get the answer they expect. In order to teach compassion, one teacher began her class with the question: "What would you do if you were walking along a road and saw a person who was terribly beaten and bruised and covered with blood?"
In a moment of honesty, a little girl replied, "I'd probably throw up."
There are many professions I should leave alone. I have neither the constitution nor the aptitude for them. And one of those occupations is nursing. Like the little girl, I might seriously embarrass myself. But I deeply admire those compassionate women and men who labor in the nursing profession.
Some years ago, a six-year-old boy from Corvallis, Oregon (United States) suffered burns over 85% of his body. His condition was so severe that several doctors gave up and one hospital would not admit him because they thought he would die anyway.
His life was saved, however, by eight courageous and committed people - his parents, three nurses and three doctors. The nurses emerged as the true heroines in this real-life drama. After other nurses had quit, these women took eight-hour shifts with the boy, seeing him through skin grafts, operations, crucial periods in which death almost gained victory, and dull, dragging days of rehabilitation. The boy grew to dislike them, as he innocently thought they caused his intense pain.
His room was like a dungeon. It measured 12 feet by 12 feet. The door was tightly shut, shades were drawn, heat blazed from a gooseneck lamp shining as a substitute for blankets. The humidity was so high the walls dripped with moisture, and dank air smelled of burned flesh and chlorine-soaked dressings.
The nurses stayed with him, dressed in caps, gowns, masks and gloves as if they were assisting an operation. Within an hour they would be soaked with perspiration. For 14 desperately long months these dedicated three gave their all to the ailing boy. Then, one day, he finally climbed from his bed and walked.
It was a great day! The nurses were rewarded for their tireless effort. The lives of all three were so deepened and their sense of satisfaction so great after fighting off the temptation to quit for 14 months, that each said they'd put forth the effort again.
What caused them to feel so satisfied? I think it was more than simply the fact that the boy lived. Together they attempted something nearly impossible, but also truly worthwhile. They poured their lives out for the sake of someone else.
It is like something American educator Booker T. Washington once said: "Those who are happiest are those who do the most for others." What these nurses did was significant. They worked hard and they worked selflessly. And in doing so, they found contentment.
Do you want to be happier?
Don't pray for blessings; pray for important work to do.
Don't pray for prestige; pray for a place to serve.
Don't pray for more things to use; pray to become more useful.
Don't pray for greater pleasure; pray for greater purpose.
Don't pray for an easier path; pray for joy on the journey, wherever
it leads.
If you do, I believe your prayers will be answered.
-- Steve Goodier
~~~.
Posted by Welcome at 12:44 PM No comments:

~~~.
This was one of my first acappella hand-written arrangements special written to suit the voices of the singers involved. At that time I didn't have a Music Notation software to hear what it sounds like and had to imagine what it would sound like. On top of that, we never got around to doing it... so I never got to hear it. After all these years, I found it and for the first time, I decided to hear what it sounded like by putting it through the Music Notation Software (Gvox Encore, formerly known as Passport Encore) that I had.

Well, here (hear) is what it sounds and looks like:

This image file here below is for viewing only.
The PDF file above is better for printing out. 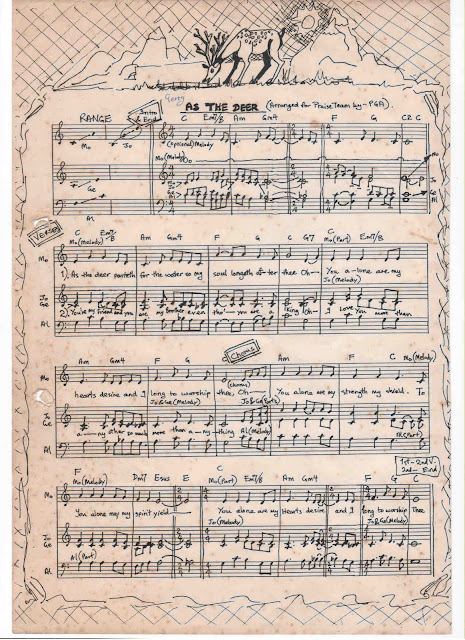