What would it take to remember the following 'Basic Music Theory'?

As it is with everything else in life...

I've learnt that...
if you have the interest, very little or no teaching is required; but
if you have no interest, no amount of teaching will ever be enough.

Maybe... that's why... I'll never be able to bake a cake;
I could never understand why the common American saying...
"piece of cake" is suppose to mean that it's "very easy".

Middle C
The Middle C is located in the middle of the Grand Staff shown in this diagram here.

The treble clef is also called the G clef because the centre of the clef curls around the the 2nd horizontal line, marked in red in the diagram below, associated with the note G above middle C.
The treble clef symbol is actually a stylised letter G.

Naming Notes on the Treble Clef Naming Notes on the Bass Clef

The names of the bass clef lines GBDFA can be remembered by the phrase 'Good Boys Do Fine Always'.
The four inner spaces ACEG by the phrases All Cows Eat Grass or All Cars Eat Gas. Posted by Welcome at 1:33 PM No comments: 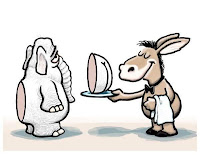 ~ giving back what actually belongs

The Assumption Song
~ by Arrogant Worms

There was an old farmer
Who lived on a rock
He sat in the meadow
Just shaking his...

Fist at some boys
Who were down by the crick
Their feet in the water
Their hands on their...

Marbles and playthings
And at half past four
There came a young lady
She looked like a...

Pretty young creature
She sat on the grass
She pulled up her dress
And she showed them her...

Ruffles and laces
And white fluffy duck
She said she was learning
A new way to...

Bring up her children
So they would not spit
While the boys in the barnyard
Were shoveling...

Refuse and litter
From yesterday's hunt
While the girl in the meadow
Was rubbing her...

Eyes at the fellow
Down by the dock
He looked like a man
With a sizable...

Home in the country
With a big fence out front
And if he asked her politely
She'd show him her...

Little pet dog
Who was subject to fits
And maybe she'd let him
Grab hold of her...

Small tender hand
With a movement so quick
And then she'd bend over
And suck on his...

Candy, so tasty
Made of butterscotch
And then he'd spread whipped cream
All over her...

Cookies that she had
Left out on her shelf
If you think this is dirty
You can go f*...yourself (f* = *find)

Posted by Welcome at 9:07 AM No comments:

Online GIFs you can use.

http://static.lowyat.net/style_emoticons/default/brows.gif
===.
Posted by Welcome at 8:53 AM No comments: