Wow! What a life! What a wonderful selfless person.


===.
Teresa Hsu Chih
From Wikipedia, the free encyclopedia
http://en.wikipedia.org/wiki/Teresa_Hsu_Chih
===.
===.
Teresa Hsu Chih (7 July 1898 – 7 December 2011), or commonly known as Teresa Hsu (Chinese: 许哲; pinyin: Xǔ Zhe) was a Chinese-born Singaporean social worker, known affectionately as "Singapore's Mother Teresa", in recognition for her active life-long devotion in helping the aged sick and destitutes locally.[4] The retired nurse was the founder of the non-profit charities—Heart to Heart Service and the Home for the Aged Sick, one of the first homes for the aged sick in Singapore. She had been a social worker in China and Paraguay and a nurse in England, before coming to Singapore to start similar non-profit charities since 1961. As a supercentenarian, Hsu was still involved in charity work and was one of very few supercentenarians who were recognized for reasons other than their longevity. She had spent almost all her savings on feeding and housing the poor and the elderly, all of whom are younger than she was, but she herself led a simple and humble lifestyle.[5] In 2005, she received the Special Recognition Award from the Singapore government in recognition of her contribution to the country.[6]

Hsu was reportedly born on 7 July 1898, in Shantou prefecture of China, during the reign of the Manchu Qing Dynasty, although this has never been independently verified. When Hsu was young, her father walked out on the family for another woman.[7]Her mother, who was illiterate, had to fend for the three girls and one brother singlehandedly. At 16, her family moved to Penang in Malaya, where they worked as cleaners in a convent. As she did not want to be a cleaner all her life, Hsu asked the nuns there to allow her to study with the children, and they agreed. Combining study with work, she passed her Senior Cambridge examinations four years later. Equipped with a basic education, she ventured to Hongkong to work and, later, to Chongqing, China, where she became a secretary and bookkeeper at a German news agency in the 1930s. She quit her job to become a volunteer, helping the injured during the Sino-Japanese War.[8]
Recalling her inability to help the wounded people whom she saw during the Second World War, Hsu decided to become a nurse. As she was overaged at 47, she wrote a request to the chief matron of the Nursing Council in London. Touched by Hsu's sincerity and dedication, her application was accepted. She spent eight years in England doing nursing and another eight in Paraguay as a member of the German charity group Bruderhof, to start hospitals and homes for the aged there.[8] In her mid-50s, she decided to return home to Penang to be with her mother. In Malaysia, she assisted her brother in starting the Assunta Foundation for the Poor in Ipoh. She also played a key role in the startup of three homes for the elderly and two homes for young girls and neglected children in Ipoh.[9]

Home for the Aged Sick

The Society For The Aged Sick at Hougang Avenue 1, Singapore
In 1961, she came to Singapore to live with her older sister, Ursula, late principal of the Convent of the Holy Infant Jesus in Bukit Timah. On seeing her dedication and commitment in helping the poor and sick, Ursula bought her a 0.6-hectare piece of land at Jalan Payoh Lai in 1965, so that Hsu could open the first home for the aged sick in Singapore.[5] The two sisters ran the Home for the Aged Sick for five years. Ursula financed its operations with her pay, while Hsu managed it and made some extra cash by selling the harvest of 10 coconut trees and a dozen banana trees in the backyard.[10]
The sisters converted a servants' quarters and a bungalow into wards for their patients, but it became increasingly difficult to cope with the numbers. In 1970, with about 100 patients, they approached the Rotary Club for funds. The Rotary Club agreed to finance the home on condition that the club take over the running of it. The sisters handed the deeds over to the Society for the Aged Sick, an association formed by the Rotary Club members. The society built three blocks to house the increasing number of residents and Hsu remained the home's matron until 1980, when she was asked to retire at 83.[10] Hsu moved into a three-room apartment on the rooftop of the Home, built by the society. After her sister died, she left Hsu a sum of money which she was able to buy flats with—five in Singapore and two in Malaysia for those people who had no money and who were asked to move.[11] When asked where all her compassion and deep caring came from, Hsu replied:

I must have got it from my mother because she was totally dedicated to the job she chose to do and that was looking after the family. I think that trait was passed down to us. I've no family, so I look after everybody else. I choose to serve everybody else who comes to me—that is my job... The world is my home, all living beings are my family, selfless service is my religion.[5]

The Heart to Heart Service Centre is located at the premises of the Society For The Aged Sick in Hougang, Singapore
Shortly after she retired, Hsu set up the Heart to Heart Service with Sharana Yao, her co-social worker, a non-profit, non-government aided welfare service which provides food, clothes and monthly cash contributions to those in need. With the help of volunteers who drive her around, she brought necessities to the homes of elderly women and destitutes in their 80s and 90s on public assistance, such as rice, sugar, biscuits, beverages and monthly cash allowances of between S$20 and S$180. She got her rations and funds from various sources—merchants, people in the neighbourhood, church friends, and their friends. The needy get on Heart-to-Heart's list based on good faith by word of mouth.[10] In 2000, a Straits Times reader wrote to comment on her selfless contributions to the society and urged the young to follow her example:

As we admire the grit, good humour and faith that Ms Hsu has, might we also ponder over a certain dilemma: Where are the Teresa Hsus of today? Ms Hsu is at an age where most would have long retired, but she takes it upon herself to be of service to others, to those who are less fortunate than her. A society like Singapore requires a lot more individuals like this and we need them now... We need to have more youths as volunteers or pursuing a career in social work as they will be the core of our society... More publicity and attention must be drawn to volunteer opportunities and more must be done to recognise dedicated people like Ms Hsu. We cannot continue in our efforts of building a gracious society without strengthening volunteerism as a culture. There is little to be gained by being more cultured if we do not take the plight of the less fortunate into consideration.[12]

Hsu was still actively involved in charity work after turning 110. An advocate of healthy living, Hsu often gave public talks at schools, welfare homes, and hospitals in Singapore and overseas about health and service to the needy.[9] When asked about the secret of her good health and longevity, Hsu attributed her good health to a spartan lifestyle, vegetarian diet, and to her positive attitude towards life:

She would start her day at 4 am with calisthenics, meditation and an hour of yoga exercises. At night, she would do yoga again, then read until midnight. She picked up yoga at age 69, when she bought a book titled Forever Young, Forever Healthy. She also taught yoga to the young and old at temples, associations, hospitals and schools. She ate sparely; her breakfast is a glass of water or milk. Lunch was often milk and salad, unless "people bring me food", and it was milk or yogurt for dinner.[13] At home, she has a 2,000-volume private library she calls Prema, which in Sanskritmeans "divine love". Today, her days were kept busy with trips to help needy senior citizens, reading and yoga practice at her sparsely-furnished single-storey house attached to the Society For The Aged Sick.[8]

Hsu died on Wednesday, 7 December 2011, peacefully at home and was cremated on the same day without any rites, as instructed by her.[14] She was the oldest living person in Singapore at the time of her death. 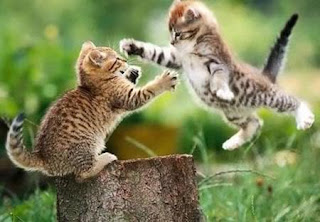 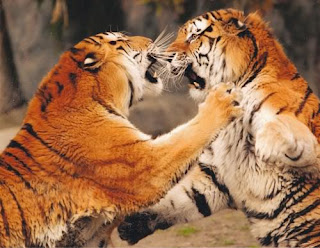 Cat Fight ~ Young Kittens ~ Young Tigers
Posted by Welcome at 10:47 AM No comments:

But this helps in Sight-Reading... which is a step just before Sight-Singing.

Here's a little tip to get you started.
Print this Music Chart and put it next to you when you play.
You'll have to reduce the size if you want to carry it around in your wallet.
And... don't worry too much... after awhile, you will NOT need this Music Chart.

This Online Game is good for remembering the music notes.
I had problems when it came to the extra ledgers lines above and below the staff.
This Online Game will help me improve my Sight-Reading.
===.
Online Game
~ Grand Staff Defender
~ for Music Sight-Reading
http://www.readmusicfree.com/grandstaffdefender.html

Anyway... here's My High-Score of the first time I played. 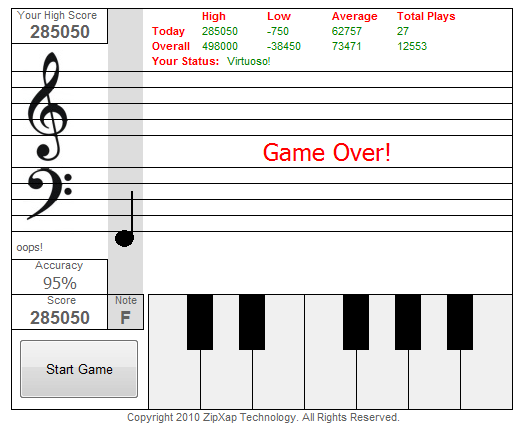