For those of you who love a good story with a happy ending. Some call it Luck, but why lean towards hopelessness when HOPE is a better option. I'm inclined towards calling it a Miracle, and Miracles still happens in our world today.
This happened during the Great Flood of Brisbane (Australia), 2011 January.
~~~ 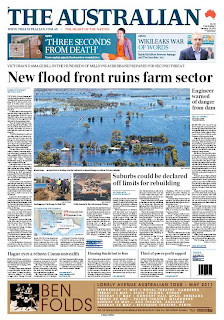 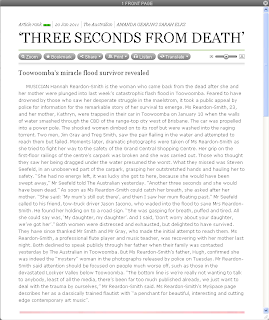 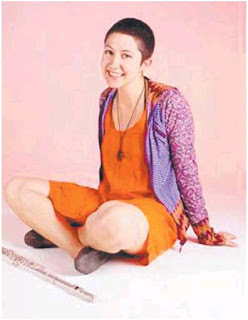 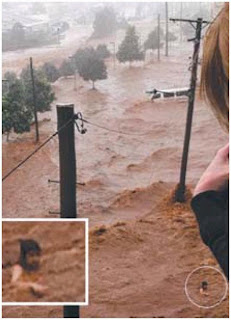 News Story ~ Miracle Rescue
~ 3 Seconds from Death
~ The Australian, Thu, Jan 20, 2011, from Front Page cont'd on Page 6
by AMANDA GEARING SARAH ELKS
Toowoomba's miracle flood survivor revealed
MUSICIAN Hannah Reardon-Smith is the woman who came back from the dead after she and her mother were plunged into last week's catastrophic flash flood in Toowoomba. Feared to have drowned by those who saw her desperate struggle in the maelstrom, it took a public appeal by police for information for the remarkable story of her survival to emerge. Ms Reardon-Smith, 23, and her mother, Kathryn, were trapped in their car in Toowoomba on January 10 when the walls of water smashed through the CBD of the range-top city west of Brisbane. The car was propelled into a power pole. The shocked women climbed on to its roof but were washed into the raging torrent. Two men, Jim Gray and Treg Smith, saw the pair flailing in the water and attempted to reach them but failed. Moments later, dramatic photographs were taken of Ms Reardon-Smith as she tried to fight her way to the safety of the Grand Central Shopping Centre. Her grip on the first-floor railings of the centre's carpark was broken and she was carried out. Those who thought they saw her being dragged under the water presumed the worst. What they missed was Steven Seefeld, in an unobserved part of the carpark, grasping her outstretched hands and hauling her to safety. ''She had no energy left, it was lucky she got to here, because she would have been swept away,'' Mr Seefeld told The Australian yesterday. ''Another three seconds and she would have been dead.'' As soon as Ms Reardon-Smith could catch her breath, she asked after her mother. ''She said: 'My mum's still out there', and then I saw her mum floating past.'' Mr Seefeld called to his friend, tow-truck driver Jason Iacono, who waded into the flood to save Mrs Reardon-Smith. He found her holding on to a road sign. ''She was gasping for breath, puffed and tired. All she could say was, 'My daughter, my daughter'. And I said, 'Don't worry about your daughter, we've got her'.'' Both women were distressed and exhausted, but delighted to have survived. They have since thanked Mr Smith and Mr Gray, who made the initial attempt to reach them. Ms Reardon-Smith, a professional flute player and music teacher, was recovering with her mother last night. Both declined to speak publicly through her father when their family was contacted yesterday by The Australian in Toowoomba. But Ms Reardon-Smith's father, Hugh, confirmed she was indeed the ''mystery'' woman in the photographs released by police on Tuesday. Mr Reardon-Smith said attention should be focused on people much worse off, such as those in the devastated Lockyer Valley below Toowoomba. ''The bottom line is we're really not wanting to talk to anybody, least of all the media, there's been far too much published already, we just want to deal with the trauma by ourselves,'' Mr Reardon-Smith said. Ms Reardon-Smith's MySpace page describes her as a classically trained flautist with ''a penchant for beautiful, interesting and cutting edge contemporary art music''.
~~~
Posted by Welcome at 8:34 AM No comments: