~~~
Candida (Comedy Drama) ~ by G Bernard Shaw
http://en.wikipedia.org/wiki/Candida_(play)
.
Candida, a comedy by playwright George Bernard Shaw, was first published in 1898, as part of his Plays Pleasant. The central characters are clergyman James Morell, his wife Candida and a youthful poet, Eugene Marchbanks, who tries to win Candida's affections. The play questions Victorian notions of love and marriage, asking what a woman really desires from her husband. The cleric is a Fabian Socialist, allowing Shaw—himself a Fabian—to weave political issues, current at the time, into the story.
.
The play is set in the north-east suburbs of London in the month of October. It tells the story of Candida, the wife of a first-rate clergyman, the Reverend James Mavor Morell. Morell is a Christian Socialist, popular in the Church of England, but Candida is responsible for much of his success. Candida returns home briefly from a trip to London with Eugene Marchbanks, a young poet who wants to rescue her from what he presumes to be her dull family life. Marchbanks is in love with Candida and believes she deserves something more than just complacency from her husband. He considers her divine, and his love eternal. In his view, it is quite improper and humiliating for Candida to have to attend to petty household chores. Morell believes Candida needs his care and protection, but the truth is quite the contrary. Ultimately, Candida must choose between the two gentlemen and she reasserts her preference for Morell, the "weaker of the two."
.
The characters of Mr Burgess, Candida's father, an unrepentant capitalist, Lexy Mill, Morell's assistant, and Proserpine Garnett, Morell's typist, add humour to the play.
.
~~~
George Bernard Shaw
http://en.wikipedia.org/wiki/George_Bernard_Shaw
~~~
Posted by Welcome at 4:15 PM No comments:

Email ThisBlogThis!Share to TwitterShare to FacebookShare to Pinterest
Labels: Candida

Everywhere Is A Great Place To Stay


~~~
Earthquake Prone Countries
New Zealand sits on the "Pacific Ring of Fire",
a vast zone of seismic and volcanic activity
stretching from Chile on one side
to Japan and Indonesia on the other.

~~~
Nearly 400 dead or missing in New Zealand quake
Posted: 23 February 2011 0704 hrs
http://www.channelnewsasia.com/stories/afp_asiapacific/view/1112437/1/.html
CHRISTCHURCH, New Zealand - New Zealand declared a national state of emergency Wednesday after one of its worst earthquake disasters left nearly 400 people dead or missing. Rescuers worked frantically to reach survivors under collapsed buildings in the stricken city centre of Christchurch, after recovering 75 bodies. About 300 people are still missing after Tuesday's 6.3-magnitude quake. "New Zealanders have woken to a tragedy unfolding in the great city of Christchurch," said Prime Minister John Key, declaring the national emergency. "The earthquake that struck the Canterbury region at ten to one yesterday has wreaked death and destruction on a dreadful scale." New Zealand's second city was a scene of "incredible carnage", police said. Rescuers had to amputate limbs from survivors to free them from smouldering ruins of buildings reduced to debris in minutes, while dazed survivors were plucked from the rubble in a frantic rescue mission that spanned the night. But in scenes of joy, 15 people were rescued from one section of a collapsed six-storey office block, and four people were pulled alive from another mangled building, including one woman who was hiding under her desk. "We've got them out of the building and they're still alive, which was the goal for us, and we're continuing to search for more," a fire department spokesman told national radio. Superintendent Russell Gibson said the toll was certain to rise as more than 500 emergency workers combed buildings that had already been weakened by a 7.0-magnitude quake six months ago that miraculously resulted in no deaths. "There is incredible carnage right throughout the city," he told Radio New Zealand. "There are bodies littering the streets, they are trapped in cars and crushed under rubble." Gibson said rescuers were going door to door through the city centre calling out to anyone who was trapped, with efforts concentrating on two city centre office buildings where survivors had managed to communicate with them. "We are getting texts and tapping sounds from some of these buildings and that's where the focus is at the moment," he said. Prime Minister Key, who has described the disaster as possibly "New Zealand's darkest day", said dozens of aftershocks continued to rock the city, hampering rescue efforts. "There is no reason that can make sense of this event. No words that can spare our pain," he said. "We are witnessing the havoc caused by a violent and ruthless act of nature." The majority of the city remained without power and Gibson said rescue crews working through the night freed 20-30 people, cutting limbs from some of those pinned in the rubble. "It's quite amazing, we have some people we've pulled out and they haven't got so much as a scratch on them, we've had other people where we've had to amputate limbs to get them out," he said. Christchurch resident Anthony Rohan said he survived in his seventh floor office by sheltering under his desk, but others were less fortunate. Tom Brittenden said he saw a woman die with her baby in her arms when she was hit by falling debris in the city's Cashel St Mall. Her baby survived but she was killed instantly. "We tried to pull these big bricks off (her)... she was gone," he told the Christchurch Press. Among those unaccounted for were 11 students and teachers from a language school in the Japanese city of Toyama, Japan's Jiji Press news agency reported. Other Japanese media reports said several of the students were later rescued alongside a teacher who had emailed her family from underneath the rubble. Police drafted in search and rescue teams in an attempt to locate survivors, while Japan, Australia and the United States were among countries sending rescuers to help. Britain's Queen Elizabeth, who is New Zealand's head of state, said she was "utterly shocked" while US President Barack Obama offered his "deepest condolences", as expressions of sympathy poured in from around the globe. The quake is the deadliest to hit New Zealand since a 7.8-magnitude tremor killed 256 people in the Hawke's Bay region in 1931. The tremor hit at lunchtime Tuesday, toppling buildings and leaving central Christchurch strewn with debris. The city's landmark cathedral lost its spire. Last year's September 4 tremor, measured at 7.0 magnitude, damaged 100,000 homes but killed no one. Seismologists said that despite being smaller, the latest tremor was more destructive than the earlier quake because it was nearer to Christchurch's centre and much closer to the earth's surface. New Zealand sits on the "Pacific Ring of Fire", a vast zone of seismic and volcanic activity stretching from Chile on one side to Japan and Indonesia on the other. - AFP /ls
~~~
Posted by Welcome at 12:14 PM No comments:

Email ThisBlogThis!Share to TwitterShare to FacebookShare to Pinterest
Labels: Everywhere Is A Great Place To Stay, News

Love Tank ~ You won't find this in the Army

You won't find this in the Army. A pink tank made of love. Or Will You??? 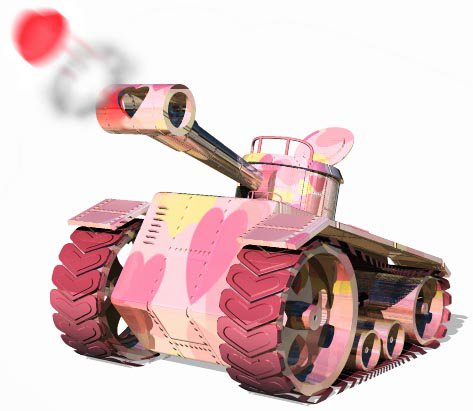