Driving Prayer for ALL Motorcyclists & Other Road Users

For details on the origin or inspiration of this prayer... click HERE.
.
===.
Driving Prayer
(for ALL Motorcyclists & Other Road Users)
(Updated: 2012 May 17, 0037hrs)
.
Dear heavenly Father... as we make this Driving Prayer to You, we pray first... for all motorcyclists as they are the most vulnerable on the road with nothing to protect them accept for their mandatory helmets, we thank You for it's invention and for making it mandatory in our country. We pray for the parents of these motorcyclists that they would put their worries to good use by praying for the safety of their child as well as for the safety of other children. Besides those riding, we also pray for all other road users... those driving... those on bicycles... and even the pedestrians... that we exercise care and diligence... and think of the safety for ourselves as well as for others on the roads. Keep us alert at all times so we may not pose a danger to ourselves or others. Calm our nerves and grant us patience so as to avoid any forms of confrontations with others on the roads... and bring us all home safely to our loved ones. We make this prayer through Jesus Christ and his loving mother. Amen.
.
===.

Posted by Welcome at 6:57 PM No comments:

Mother's Day has just passed (yesterday, Sunday, 2012 May 14) and these words in the last 2 paragraphs of the article below brought tears to my eyes...

"Muhammad Najib told his mother of his intention to give up riding after spending a quiet Mothers' Day with a "picnic" of home-cooked food in the hospital room on Sunday. ~ "It [the accident] happened just before Mothers' day, and I imagined for a moment there what if something worse had happened to me? It would be the worst Mothers' day present a mother can get," he said.

===.
News ~ Muhammad Najib told his mother of his intention to give up riding

The last thing Muhammad Najib Ghazali saw before he was sent flying from his motorbike was the dislodged tyre of a taxi coming straight at him.

Moments later, he was flung off from his bike and hit the tarmac hard, dislocating his right arm, fracturing his rib and hurting his spine.

Najib, still warded in Tan Tock Seng Hospital, is one of two survivors from the high-speed accident involving a Ferrari in the wee hours of Saturday morning. The fatal accident at the intersection of Rochor Road and Victoria Street has already claimed three lives – the Ferrari driver was killed on the spot while the taxi driver and his passenger both later died in hospital.

The taxi passenger has been identified as Shigemi Ito, a Japanese woman in her 20s who is believed to be living and working in Singapore, the Straits Times reported.

A young woman reportedly from China was with Ma in the Ferrari during the crash and she suffered head injuries and fractured her right leg.

"It was horrifying to see the tyre [of the taxi] right before my eyes, and after that I saw the taxi flip," said the 26-year-old former dispatch rider.

Clad in a blue hospital gown and surrounded by his family in a ward at Tan Tock Seng Hospital, Najib recounted the horrific events on the night itself.

Wearing a tired smile throughout the whole interview, he told Yahoo! Singapore, "The Ferrari beat the red light and smashed into the taxi, and the taxi smashed into my bike. I did not see the smash. I only heard it because I was making a right turn. The moment I turned my head to look, I saw the tyre of the taxi coming towards me."

Sporting a snaking long scar down his right forearm, Najib said the taxi went  "airborne" seconds before it landed 50 metres away from where it was hit by the Ferrari.

The aftermath of the accident was a "smoky mess".

"From there I totally couldn't see anything because there was so much smoke and the debris was just starting to settle together with the petrol. It was raining fuel," he said.

Najib counts his lucky stars to have escaped his fourth major accident and "uncountable" minor ones. The avid motorcyclist, who started riding since he was 19-years-old, sees his most recent close shave with death as a sign to finally stop riding.

"This is the fourth time I cheated death. Usually people say strike three, you're out. [In the accident] I am the most unprotected one but I survived, so I don't want to take the risk anymore. I want to just live to the fullest now," he said.

Muhammad Najib told his mother of his intention to give up riding after spending a quiet Mothers' Day with a "picnic" of home-cooked food in the hospital room on Sunday.

"It [the accident] happened just before Mothers' day, and I imagined for a moment there what if something worse had happened to me? It would be the worst Mothers' day present a mother can get," he said. 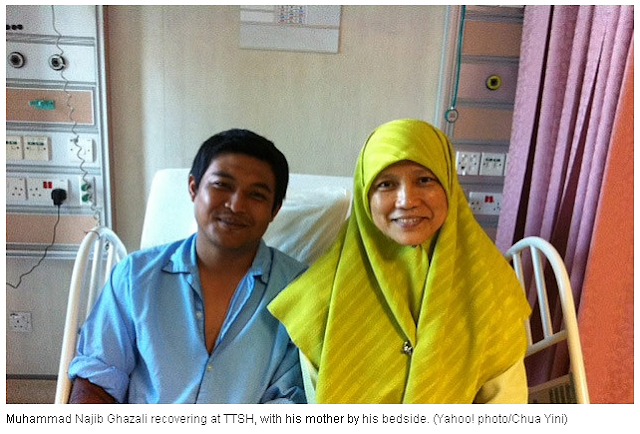 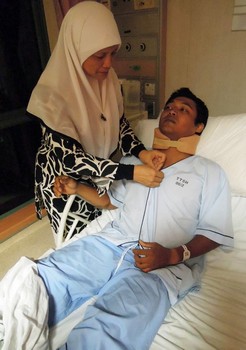 Posted by Welcome at 5:32 PM No comments:

Posted by Welcome at 9:31 AM No comments: