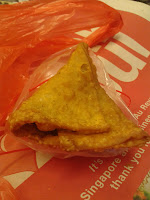 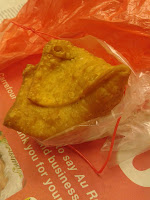 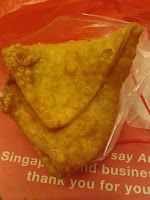 Found some infor of this at wikipedia,
Samosa ~ http://en.wikipedia.org/wiki/Samosa 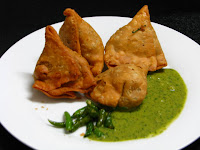 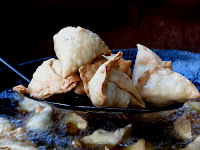 Chamuças
~ In Portuguese-Speaking Countries... especially Goa and Portugal, samosas are known as Chamuças, usually filled with chicken, beef, pork, lamb or vegetables, and generally served quite hot. They are an integral part of Goan cuisine and Portuguese cuisine. Chamuças are also relatively common in Brazil (where they are known by the name Pastel) and several former Portuguese colonies in Africa, such as Cape Verde, Guinea-Bissau, São Tomé and Príncipe, Angola, and Mozambique. 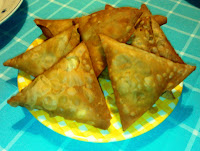 Posted by Welcome at 2:52 PM No comments: