Purple Roses - You Are Loved

Purple Roses - You Are Loved

Purple is your favourite colour
So I'm dedicating this entry to you
I wouldn't share it with any other
For no one loves purple the way you do
~ PGA 2006 Oct20, 1500hrs

Posted by Welcome at 2:54 PM No comments: 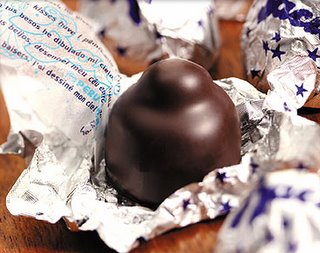 This is one of my favorite chocolates.
In Italian “Baci” means "kiss".
It comes with love messages in the wrapper.
Here are some of the “Kiss♥” messages found in the wrapper.

♥ "The kiss is a sweet discovery of oneself after a long search."
♥ "The kiss is a promise written upon the lips."
♥ "If this be love, don't speak; kisses are all that's needed."
♥ "With kisses words are unnecessary."
♥ "No words are needed between two loving hearts."
♥ "Love without kisses dozes and then falls asleep."
♥ "Love is a symphony in which the sweetest notes are kisses."
♥ "When love speaks, it kisses."
♥ "Why speak? The entirety of love can be said in a kiss."
♥ "Love dictates, but a kiss writes the secrets of the heart."

This is my first attempt at putting a picture on this BLOG. I'm going to use this as my Ident. Why a Tiger? I was born in the Year of the Tiger BUT the Month of the Lion (Leo).
Pictures updated from Bottom-Up.
(Do Not Remove Pictures)

Posted by Welcome at 3:55 PM No comments:

Story Of A Blind Girl

Someone sent me this story...

There was a blind girl who hated herself just because she's blind.She hated everyone, except her loving boyfriend. He's always there for her. She said that if she could only see the world, she would marry her boyfriend.

One day, someone donated a pair of eyes to her and then she can see everything, including her boyfriend. Her boyfriend asked her, "now that you can see the world, will you marryme?"

The girl was shocked when she saw that her boyfriend is blind too, and refused to marry him. Her boyfriend walked away in tears, and later wrote a letter to her saying."Just take care of my eyes dear."

The Story Of A Blind Girl above - reminds me of a Malay Movie 'TAKDIR ILAHI (Destiny)'. I think P Ramlee was in the movie.

I remember watching this on TV as a boy (maybe about 8 years old) with my parents helping me understand the story as it was all in Malay.

This is how I remember the Story. Those who’ve watched it please correct my mistakes for I’m sure there must be. I would like to watch this story again. There was singing in the movie too.

There was this girl who was blind (I can’t remember if she was born blind or was it due to an accident) and she had a sister. They met a Doctor (I think played by P Ramlee). The blind girl was very good natured. However, after the Doctor cured her blindness, she turned out nasty. So nasty that in one scene, she didn’t allow her own mother to come into the home even though it was raining heavily. Her mother took refuge under a car and I think she died. The movie was in black & white and my father told me that the water was red with her mother’s blood and I believed him. Now I’m not so sure. My father also explained to me that ‘Takdir’ means something like ‘God’s Will’ and in one of the last scenes, the blind girl’s sister slapped her and as she fell, both her eyes hit some “sharp objects” and she went blind again. I think that was the ending. I still have those scenes playing in my mind but not very clear. 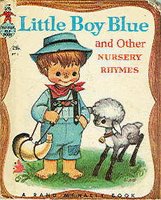 Little Boy Blue
come blow your horn.
The sheep in the meadow,
the cow in the corn.
Where's the little boy,
who look's after the sheep
He's down in the haystack
fast asleep.