What I learned today...

===.
I've learned that...
it is pointless to argue with rude people who
are blatantly bias... and completely illogical;
it is better that I do something more pleasant
with my time... like... eating ice-cream.
~ age 49

This person was so rude.
Note the name of this rude person ('Gar Toh')
below at this website that triggered this posting.
He's so blatantly rude.


Gar Toh Amy Khor is just another lackey speak to please her master !!!!!

Janice Huang ‎@Gar Toh - Please be respectful. Dr Amy Khor is a dedicated MP, just like any of the revered WP MPs. Just because they disagree doesn't mean that either of them are any less well-meaning.

Gar Toh Janice - so what. Did they respect you when they squeeze out your juice - think lah...

===.
This was the News Article they were discussing about:

Original Link: http://www.straitstimes.com/BreakingNews/Singapore/Story/STIStory_771997.html
or see this screen shot... click on image to enlarge for easy reading. 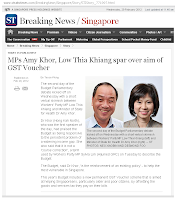 ===. Deviating to English ===.
Some English lessons I picked up while doing this post.

Did you know that?

•
The suffix -ness is used to create nouns from adjectives and participles.

Zwqing:
Which one should I use? Do they differ in meaning or usage? Thanks in advance...

Yankee:
I agree with Eimai_Anglos. You only need the word "bias".
I would consider "biasness" to be wrong in any situation.
You might possibly be able to justify the use "biasedness" for reasons of style (e.g. parallel structure),
but as a general rule I would recommend not using either one of those words.

Anonymous 1:
Biased is an adjective.
Bias is the noun.
Neither biasedness nor biasness -- bias.

Yankee:
wrt {Bias is the noun}
Exactly, Anonymous 1. And that's what makes adding -ness to the word bias so wrong.
The suffix -ness is used to create nouns from adjectives and participles.

Anonymous 2:
Biasness is actually okay.
http://www.morewords.com/word/biasness/
http://www.wordnik.com/words/biasness
I don't know how legitimate these sources are, though.
coloraday:
Biasedness doesn't exist.
Biasness is an obsolete word and is not used any more.