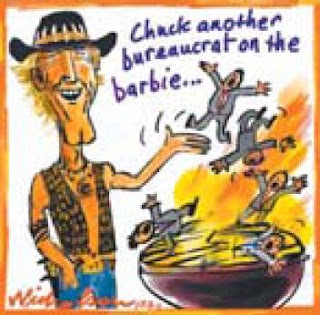 ~~~
News Article:
17 Aug 2011
The Australian
by SUSANNAH MORAN
Seven years later, Hoges says he is ready to settle his tax stoush if 'sanity can prevail'

PAUL Hogan is ready to sit down with the tax office and talk about settling the mammoth stoush that led to the US-based actor being branded a tax cheat and curtailed his travel to and from Australia.
He hopes ''sanity will prevail'' but says he has experienced enough in the ''ridiculous'' seven year probe into his tax affairs to be wary.
And Hogan knows that, unlike being charged with a criminal offence — where there is a presumption of innocence — when it comes to tax, the onus on the taxpayer is to prove the Australian Taxation Office wrong. ''I don't feel like giving one cent,'' he tells The Australian. ''The tax office has wasted millions of dollars . . . and it's like they say to me, 'Come to a gunfight, but you can only bring a knife'. If you want fairness, you put everything on the table.''
Still, he says he would like to sit down with someone ''and find out what I have done wrong'' — even though he says he doesn't have one-tenth of what the ATO is seeking from him. Hogan and his artistic collaborator John ''Strop'' Cornell have been accused of using complex offshore structures to avoid paying millions of dollars in tax on income that includes profits from the hugely successful Crocodile Dundee franchise.
As part of the ATO's Project Wickenby probe, Hogan was hit with a huge tax bill in late 2009 after being accused of not declaring $37.6 million over several financial years dating back to 1986. The total bill, which includes interest and penalties, continues to rise.
Hogan and Cornell deny any wrongdoing. It is ATO policy not to comment on individual cases. The Australian can reveal that a key witness relied on by the ATO in its case against Hogan and Cornell has now sworn a statutory declaration the evidence he gave was not properly reflected in key documents that formed the basis of the tax office's case. The man is one of several people tracked down by Hogan's lawyers. It is understood that when shown how his evidence was being used by the tax office, the man said he had must have been misunderstood, as it did not reflect his evidence or beliefs. A sworn statement outlining his concerns has now been sent to the tax office. Hogan said he was incredulous at the latest turn of events. ''That is the kind of thing I am running up against,'' he says.
In Sydney to appear as guest of honour at a charity dinner tonight, Hogan says it is another indication that the tax office is ''wasting taxpayers' money'' pursuing him. Hogan knows that he makes himself a target when he speaks out, but it doesn't stop him and he is adamant he has done nothing wrong.
He is also angry that he is still the subject of a Departure Prohibition Order, which makes coming in and out of Australia an onerous process. ''I don't want to sound like a whinger,'' Hogan says. ''But it's ridiculous.'' The DPO was slapped on Hogan last year when he arrived in Australia on the eve of his mother's funeral. Hogan questions claims that Project Wickenby has issued tax bills totalling more than $1 billion. ''Does that include the double counting?''
Hogan wants to know, as he leans over the kitchen counter at the house where he is staying in Sydney. Fixing himself a cup of tea, Hogan says the assessments are ''padded'' — that if one person is accused of dodging $10m and another person $10m, then the tax office also hits the company the pair is involved in with a $20m bill for $40m worth of assessments. The Australian National Audit Office has launched an investigation into the effectiveness of Wickenby, and the Commonwealth Ombudsman has agreed to examine claims by Hogan that he is being denied procedural fairness.
In March, The Australian revealed that ''key documents'' provided to Hogan by the tax office were largely blacked out, rendering them useless. ''I am hoping we will find a politician that can take a good look at it,'' Hogan says of the Wickenby probe. Hogan, Cornell and their accountant Tony Stewart have been the highest-profile targets of the tax probe dubbed Project Wickenby. Hogan says he is now better known for his tax troubles than for his career as a comedian, writer and actor.
Although the Australian Crime Commission last year announced it had dropped its criminal investigation into Hogan and Cornell, effectively clearing them of allegations of tax fraud, the actor says ''the damage has been done''. The sound of kookaburras outside attracts Hogan's attention as he talks of his love of Australia and his willingness to support charities. He is in Sydney because his old mate, the former tourism minister John Brown, asked him to attend tonight's function.
But as talk of tax continues, Hogan gets worked up. He has spent millions of dollars fighting the tax office and can't help but refer to ''faceless'' bureaucrats as ''arseholes''. He talks of wanting to ''swing punches''. \
Asked if there is a figure he would be prepared to settle for, to make everything go away and get his life back on track, Hogan doesn't miss a beat. ''Yeah, $10m,'' he says. ''If they will give me $10m I will go away.''
~~~
Posted by Welcome at 10:34 AM