One of the earlier videos stopped working (I've deleted them), but I've managed to find more links to this Stepping Out Opening Theme Song.

One of the links is good coz it shows the Romanized Chinese Title 'Chu Lu' which I can read.

And also... the '出路 - 主题曲' which I copy-pasted to Google Translate shows 'Outlet - Theme Song'... which I take to mean 'Stepping Out', the official English Title.

Scroll down for more info about this show. 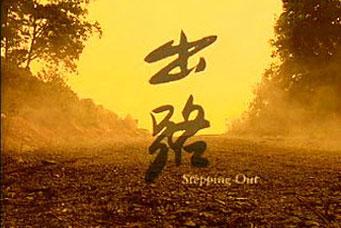 From Wikipedia, the free encyclopedia
http://en.wikipedia.org/wiki/Stepping_Out_(TV_series)

Stepping Out (simplified Chinese: 出路) is a Chinese drama in Singapore, telecast in 1999 and repeated in 2006.

The series mainly talks about the Chinese immigrant experience in Singapore, and their rough, hard ascent (along with the rest of Singapore) to the present state of wealth and riches that is unprecedented in Singaporean history.

It is the 1920s, a time of great chaos in China. Poverty was rampant in many regions, forcing many people to seek their fortune in the fabled Southern region known collectively as Nanyang. The story begins with three young men from the Fujian province.

The son of a wealthy tea plantation owner, Jia Fu (Xie Shaoguang) is a wastrel. Lazy and childish, the only saving grace to his character is his thoughtless generosity. In his naivete he loses his inheritance and is left with nothing but the support of his industrious wife, Ju (Ivy Lee).

After Tian's (Chunyu Shanshan) father dies on the trip to Nanyang, his widowed mother and his two siblings are forced to live a life of scavenging for food in the wilderness. After his sister is killed and his brother goes missing, he is hired by a rich merchant. His new employer is cruel and his meekness makes him an easy target for bullying, but he finds himself attracted to the man's second wife, HaiYan (Yvonne Lim).

Despite the disparity between their situations and personalities, they each find themselves making the trip to the port of Singapore in Nanyang all with the same purpose: To seek a way out of their circumstances and a better future.