Grow Old With Me ~ Poem (& Song) by John Lennon

To my lovely wife.
Merry Christmas! 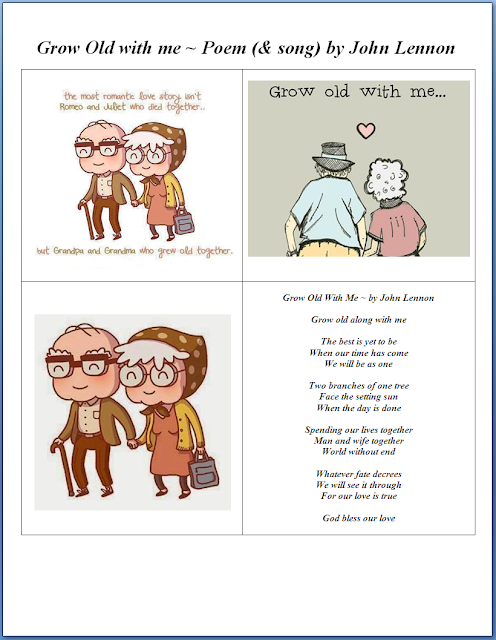 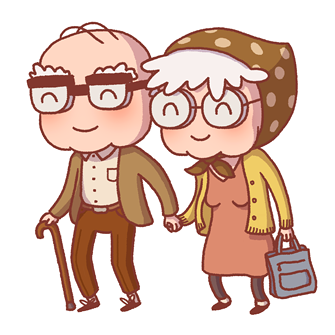 ===.
This song is
Originally by John Lennon
~ but these Cover Versions are better

Grow Old With Me
~ Cover Version by Glen Campbell
http://www.youtube.com/watch?v=d5UGmWbixRI

===.
Grow Old With Me
~ Cover by Glen Campbell
~ Original by John Lennon

"Grow Old with Me" is one of the final songs written by John Lennon. It was recorded by Lennon as a demo while in Bermuda in 1980, and later appeared on the posthumous album, Milk and Honey in 1984. It was also considered as a possible reunion single by his former bandmates during the making of The Beatles Anthology. Since its release, the song has become a staple at wedding ceremonies.

The song was inspired from two different sources: from a poem penned by Robert Browning entitled "Rabbi Ben Ezra" and a song by Lennon's wife Yoko Ono called "Let Me Count the Ways" (which in turn had been inspired from a poem by Elizabeth Barrett Browning).

Lennon and Ono had for some time admired the poetry of Robert and Elizabeth Browning, and the two songs were purposely written with the couple in mind.

Ono woke up one morning in the summer of 1980 with the music of "Let Me Count the Ways" in her head and promptly rang Lennon in Bermuda to play it for him. Lennon loved the song and Ono then suggested to him that he should write a Robert Browning piece to accompany it. That afternoon, John was watching TV when a film came on which had the poem "Rabbi Ben Ezra" by Robert Browning in it. Inspired by this turn of events, Lennon wrote "Grow Old With Me" as an answer to Ono's song, and rang her back to play it to her over the phone.[1]

The two new songs, "Grow Old With Me" and "Let Me Count the Ways" were originally meant for inclusion on the Double Fantasy album. However, Lennon and Ono were working on a tight deadline to get the album finished and released before Christmas, and decided to postpone recording of the song until the following year (1981) for the follow-up album, Milk and Honey. This never happened due to Lennon's murder in December 1980.

Had the song been fully finished and recorded, Lennon and Ono had envisioned it as a "standard, the kind that they would play in church every time a couple gets married, with horns and other arrangements". A few different home recordings of it were made by Lennon and Ono and one of these versions was released on "Milk and Honey". Recorded in the couple's bedroom with a piano and rhythm box, it was the last recording ever made of the song by Lennon.

In 1998, at Ono's request, George Martin created an orchestrated version of the recording, which was released on the John Lennon Anthology box set.

In 2009, an acoustic version and an alternative piano arrangement came to light and now circulate among Lennon collectors.

Peter Randall, a Canadian artist, was the first artist known to record a cover version of the song when he recorded and released it on his 1990 album, Better Times. The video received some airplay on Canadian music video channel, Much Music's love segment entitled Mush Music.

Mary Chapin Carpenter recorded a cover version of "Grow Old With Me" on the 1995 album Working Class Hero: A Tribute to John Lennon. This version mainly stays true to Lennon's original home recording, featuring just Chapin singing with a piano for most of the song.

Damian Wilson recorded a cover for his 2001 EP, which shares its title with the song and was eventually incorporated into his album Disciple.

Email ThisBlogThis!Share to TwitterShare to FacebookShare to Pinterest
Labels: EBS, Grow, Grow Old With Me ~ Poem (& Song) by John Lennon, Growing Old With You