News Article: Anamalia Taufa ~ Story of an Inspiring Woman with a Tragic Ending... BUT she inspired many of those around her... and so... her story will not end so easily as she continue to live in their lives. 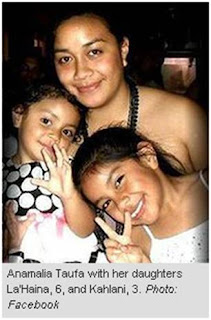 Anamalia Taufa ~ Story of an Inspiring Woman with a Tragic Ending... BUT she inspired many of those around her... and so... her story will not end so easily as she continue to live in their lives.

~~~
http://www.brisbanetimes.com.au/queensland/she-has-her-girls--shes-with-her-girls-20110825-1jalt.html?from=brisbanetimes_sb
'She has her girls ... she's with her girls'
Marissa Calligeros
August 25, 2011 - 8:32AM
Pix ~ Anamalia Taufa with her daughters La'Haina, 6, and Kahlani, 3. Photo: Facebook
Misi Matauina was celebrating his birthday the night a deadly inferno claimed the lives of his highschool sweetheart and their two young daughters. Tragedy befell the young Matauina family about midnight on Tuesday when the home they shared with his children's grandparents at Slacks Creek was consumed by flames. Mr Matauina's daughters La'Haina, 6, and Kahlani, 3, were the youngest victims of the blaze.
His partner and high school sweetheart, Anamalia Taufa, perished alongside her daughters, her mother Fusikalau, aunt Neti-Teukisia (Jeanette) Lale, Neti's five children Jerry, Paul, Lafoa'i, Selamafi and Richard, and teenage niece Ardelle. Mr Matauina survived after jumping to safety from an upper level window of the wooden house believing his partner and children had already escaped the fierce blaze.
The young couple became parents at the tender age of 17, with Anamalia giving birth to La'Haina. Despite this, the talented Anamalia completed her final year of school at Mabel Park State High School. Three years later, she gave birth to the couple's second daughter, Kahlani. Despite being a young mother-of-two, Anamalia went on to study law and criminology at Griffith University, graduating with a diploma last year with ambitions for a degree.
The "high-achieving all-rounder" was then able to embark on her career in law with the support of her "strong family", high school friend Adelle Fitisemanu said. "She had a really strong, close, supportive family," Ms Fitisemanu said, as she sat on the curb yesterday outside the scarred shell of her friend's home. "She was an all-rounder and really talented. She was a great singer and was athletic too. "She was a high achiever."
As family and friends tried to come to terms with the loss of three generations of two families in the Wagensveldt Street blaze yesterday, police and firefighters continued to search the charred remains of the house for the victims.
Yesterday, four bodies were removed from the ruins to the wails of family and friends. In pairs, the bodies were driven away in hearses, which stopped briefly to allow mourners to kiss the caskets in line with Tongan tradition as a gesture to the deceased they were not alone and not forgotten. Hundreds gathered outside the home, singing together in prayer for those lost throughout the day and night. Some will remain there for the duration of the traditional 10-day wake, in rain or shine, sitting on Tongan 'tapa' mats made of mulberry bark.
Ms Fitisemanu struggled to contain her grief as she spoke of the memories she would now cherish of her dear friend. "We were singers at school," she said. "We entered all the talent quests. Anamalia was the school singer at weekly assembly and other events." Ms Fitisemanu gazed up at the grey skies over Slacks Creek yesterday afternoon as she spoke about her friend's "loving heart". "If she could right now, she would tell her family that she loved them. She would only have messages of love," Ms Fitisemanu said. "But she has her girls ... she's with her girls."
The Taufa and Matauina families often hosted large gatherings at their home, roasting pigs in pits in their backyard in line with Samoan and Tongan tradition. Last weekend, Mr Matauina and his family holidayed on the Gold Coast to celebrate his 22nd birthday. Yesterday his family, and all cause for celebration, was lost, but he was not alone. Standing strong by his side yesterday were hundreds of his extended family in an inspirational display of community strength, resilience and love.
~~~
Posted by Welcome at 10:19 AM