The Full Perspective is a Better Point Of View 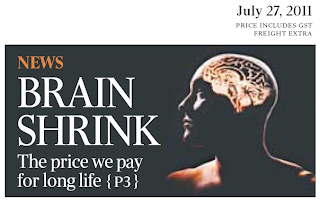 .
The price we pay for long life HUMAN brains shrink as people grow old, unlike even our closest animal relative, says a new study in the Proceedings of the National Academy of Sciences that highlights what researchers call the unique character of human ageing. The human brain can shrink up to 15 per cent as it ages, a change linked to dementia, poor memory and depression. Until now, researchers had assumed this gradual loss in later years was universal among primates. But in the first direct comparison of humans to chimpanzees a brain-scanning team led by George Washington University anthropologist Chet Sherwood found chimpanzees do not experience such brain loss. From that, researchers concluded only people were afflicted by this oddity of longevity. The scientists used magnetic resonance imaging scans to measure changes in five key brain structures involved in memory, reasoning and other mental processing, as well as overall brain volume. They compared measurements from 87 adult humans ranging in age from 22 to 88 years old with the brain volumes of 99 adult chimps ranging from 10 to 51 years old. They measured the brain's grey matter of neurons and the white matter of its connecting neural fibres. On average, human brains weigh about 1.36kg. Chimp brains weigh only a third as much. No matter where the researchers looked, they found the human brains lost significant volume over time while the chimpanzees' did not. Until recently, the study of brain differences between humans and other species had little impact outside the field of anthropology. But the rapid growth of the ageing population worldwide is turning evolutionary biology into a pressing topic of public health. Stress can affect brain size. So can depression. Diet can be a factor, too. More broadly, though, humanity's unusual shrinking brain just may be the price our species pays for living so much longer than other primates.
.
~~~
Posted by Welcome at 8:09 AM