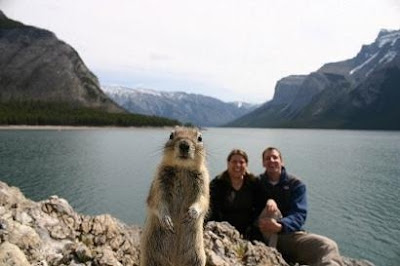 .
It's nuts! Squirrel becomes a Web sensation
AFP - Thursday, August 20, 2009
.
WASHINGTON (AFP) - - There's a squirrel popping up all over the Internet.
.
The rodent first made its appearance in a holiday photo taken by an American couple in Canada and has gone on to become a Web sensation.

Melissa Brandts and her husband, Jackson, of Minneapolis, Minnesota, were taking a time delay picture of themselves in front of a lake at Canada's Banff National Park when the squirrel jumped into the frame.

Melissa Brandts submitted the picture to National Geographic's "Your Shot" photo gallery with an explanation of how the unusual picture came about.

"We had our camera set up on some rocks and were getting ready to take the picture when this curious little ground squirrel appeared, became intrigued with the sound of the focusing camera and popped right into our shot!"

"A once in a lifetime moment! We were laughing about this little guy for days!!"

The holiday photo has since gone viral on the Internet and websites such as "The Squirrelizer" have sprung up in which the photo of the squirrel can be inserted into any picture.