Art ~ Tiger On The Beach ~ by Sudarsan Pattnaik 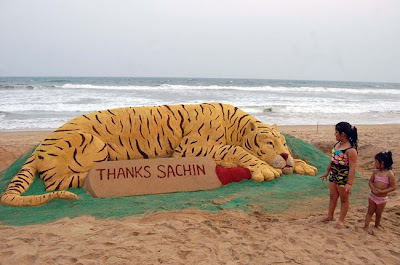 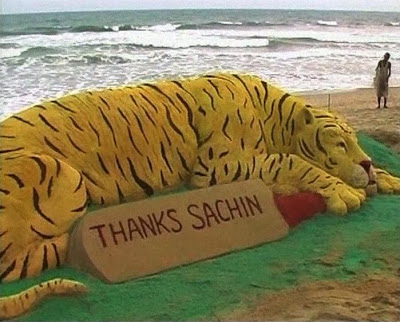 Report by orissadiary correspondent; Puri: One day before Sachin dedicate his Forty-second century for Tiger. Now a sand tiger saying thanks to Sachin Tendulkar at Puri beach of Orissa. Sachin Tendulkar, a tiger on the cricket pitch is fighting a battle for another tiger. Sachin’s forty-second century scored on Friday against New Zealand was dedicated by the batsman to the cause of tiger conservation project in India. Today India also wins the 1st test match at New Zealand.

Internationally acclaimed sand artist Sudarsan Pattnaik created a 15ft long tiger which holding a 5ft long cricket bat with a message “Thanks Sachin” at Golden beach of Puri, Orissa. Similipal reserve forest of Orissa is India’s biggest tiger habitat. I hope In future the tiger should not be a paper tiger for the future generation to come. The step should be taken for the increase of tiger population. I would like to tanks Sachin to dedicate his ton for increase of tiger population said Sudarsan. He uses 15 tones of sand and 7hour to complete it. Students of Sudarsan sand art school joins hand with him.

Before Sudarsan created many sculptures to promote wildlife around the World. Next month Sudarsan is going to japan to participate in World sand sculpting competing.

Sudarsan has so far participated in more than 37 international sand sculpture championships across the world and won many awards for the country. In 2008 Sudarsan won the World champion title as a first Indian at Germany.
Posted by Welcome at 1:40 PM