This table, however, only shows seven chords, one chord for each note in the scale. There are many chords that can be built using the notes from a scale, and the next table 4 shows 27 chord types harmonized to the major scale. Notice that each of the seven notes has many chord types associated with it (the chords chapter will discuss how to build chords). This will allow greater creativity with so many chords to choose from!
Table 4 (above) - 27 chord types harmonized to the major scale

After learning how to harmonize a few scales, it should be clear to see that any scale can be harmonized to build many chords. Table 5 below shows several examples of common scales harmonized to triad chords and seventh chords. These triad chords can be extended even further to give even more chord possibilities! *click the table below for full sized image. 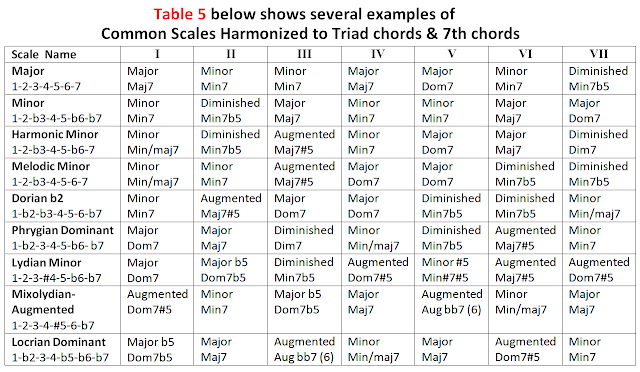