Composition and numbering
The Book of Psalms consists of 150 psalms, each of which constitutes a religious song, though one or two are atypically long and may constitute a set of related chants. When the Bible was divided into chapters, each Psalm was assigned its own chapter. Psalms are sometimes referenced as chapters, despite chapter assignments postdating the initial composition of the "canonical" Psalms by at least 1,500 years.[citation needed] Though most of the psalms are believed to have been intended for singing (some even include instrumentation and the names of tunes to sing to), none includes any form of pitch-related musical notation, so it is impossible to determine the tunes to which the psalms were to be sung. (The Hebrews were not known to have or use any sort of musical notation.)

Numbering
The organization and numbering of the Psalms differs slightly between the (Masoretic) Hebrew and the (Septuagint) Greek manuscripts: 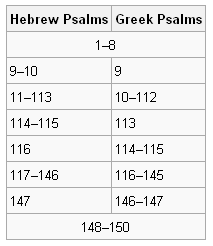 Christian traditions vary:
For the remainder of this article, the Hebrew Psalm numbers will be used unless otherwise noted.